In my writing for Counter-Currents, I’ve called for the formation of a dissident high culture. At the time of writing, there is only a smattering of cultural institutions which are explicitly Dissident Right, which means that the future of dissident high culture is whatever we make it. The future is a vast empty space which we have been tasked with filling.

But the past of dissident high culture is not so empty. No, it is rather crowded over at the Restaurant de la Tour Eiffel. Indeed, you could say that the avant-garde of the past was decisively reactionary. This is what we learn in Reactionary Modernism, a collection of Jonathan Bowden’s writings and transcribed speeches on the subject of the Right-wing modernists, many of whom are pictured having lunch and reading BLAST magazine in that famous William Roberts painting. 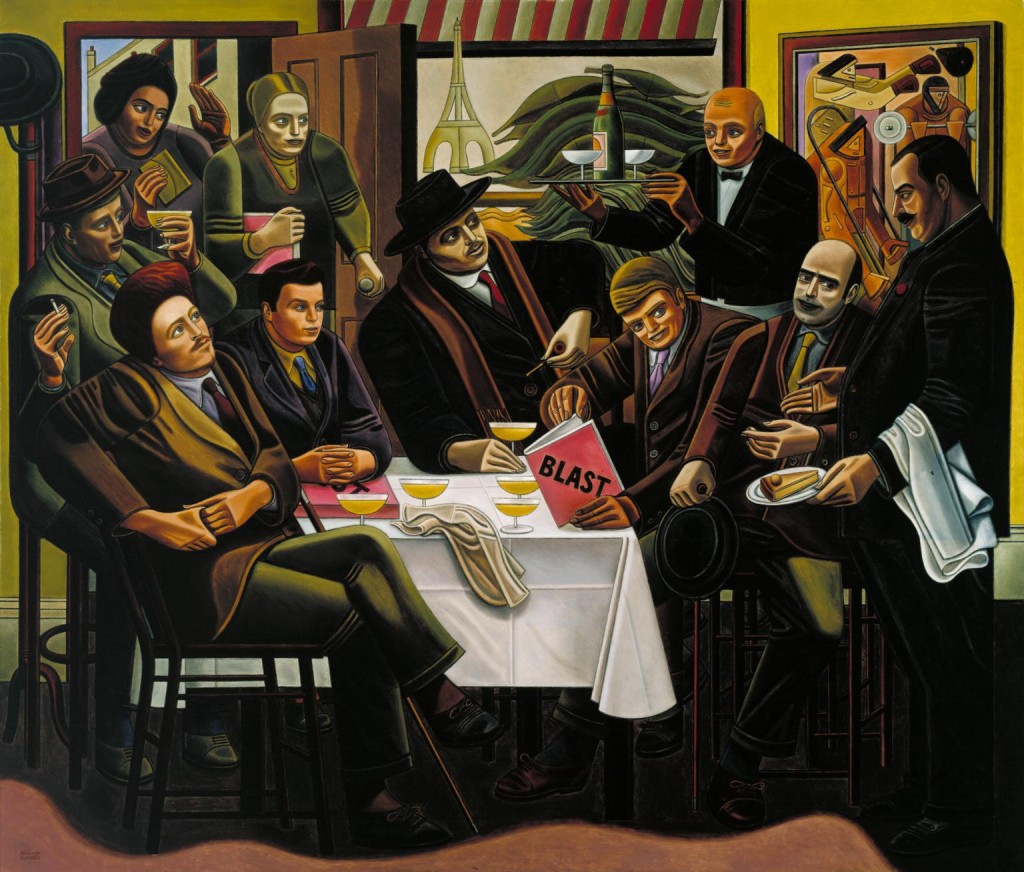 The collection leads us on an intellectual journey through what modernism was in its own time, contrasting it with what it is shown as and matured into in our own time. It begins with the inception of the creative movement away from representationalism, the birth of photography, which was as momentous in the visual art as Nietzsche’s observed death of God was momentous in philosophy. Bowden is our Virgil on this journey through the past, presented through profiles of four — in places called The Big Four — reactionary modernists: Wyndham Lewis, Ezra Pound, T. S. Eliot, and W. B. Yeats. Arno Breker, the Third Reich’s official “opposite of degenerate” sculptor and architect, and Stewart Home, an eccentric and radically dissolutive British artist whom Bowden considers the epitome of nihilism in the arts, but with whom the reactionary Big Four have deep parallels, are also profiled.

The reader is told a tale in the now-classic Bowden style, twisting and turning through the transcribed speeches, sometimes with large, delicious digressions building the canvas on which the portrait of the artist is to be discussed. Obviously we cannot appreciate the artist or his work without understanding the historical context in which he lived, and not just artistically. No, Lewis, Pound, Eliot, and Yeats were all men who lived in their time, who were of their time, and influenced the affairs of their time, being influenced by it all the while. In the lecture on Yeats, for example, we are told that Yeats became a Senator of the Irish Free State, which is then followed by a history of Irish politics, and a book on reactionary modernism suddenly traffics in names like Eoin O’Duffy, Michael Collins, and Eamon De Valera. What becomes clear is that when speaking about Yeats, we are also speaking about the Irish nation and the Irish race, wherever it lives, since Yeats the artist positions himself as an antenna of that race, as Ezra Pound would put it.

Of course, the question will arise as to what use the reactionary has for modernism. Isn’t he against it, revolting against the modern world, as we’re wont to describe ourselves? The reactionary, the Rightist comes in many guises. He is sometimes a small-c conservative and its allied term, a conservationist, working to conserve that which came before him, both in the realm of the physical and the societal, understanding fundamentally that the two cannot be meaningfully separated. He is sometimes a big-brained theorist, developing a parallel political formula for a state and society as it should be, or at least as men could live with. Sometimes he is an old man on a porch, remembering stories from the time when his grandfather was a boy, at other times a wanderer who comes to strange lands so that he finds his own familiar, yet unknown nature reflected in their strangeness. But the role of the Rightist to which Bowden draws our attention in Reactionary Modernism is that of the wrecker, the dissolver, the sledgehammer, the stick of dynamite in the load-bearing pillar of a rotten edifice, and the cold, cruel winter that must precede regenerative spring.

Before the battle of our day can be won, we must clear away the lies, the debris of the past, and the soft, sterile age of comfort and popular appeal. Reactionary modernism is the realm of energy, dynamism, vitality, and danger. Wyndham Lewis doesn’t walk; he stomps around, taking large steps. He argues, he gets in your face, he makes enemies, he “infights,” he BLASTS, but even when he’s of a friendly disposition, he doesn’t merely affirm or meekly smile; he BLESSES. There’s an intensity to Lewis which we see throughout the phenomenon of reactionary modernism. Pound is more reserved and scholarly, but his intensity is one of more depth and less pomp. With . . . usura, hath no man a house of good stone. With . . . usura: there is an eternity between “with” and “usura,” a plough plunging deep into the earth to overturn it. Hath no man a struggle, that initial step of man and beast. A house of good stone, momentum gathering, earth rolling. With. Usura.

Reactionary modernism is the aristocratic answer to the mass age, a refusal to comply with the need to appeal to a broad audience. It erects walls around itself, laughing in the face of accessibility. It seeks to alienate the casual observer and carve out a space for itself free from the accursed gaze of bourgeois man who sees art as a distraction rather than as a calling. The political Left, those great levelers and, paradoxically, great elitists would love nothing better than to sweep modernism’s reactionary origins under the rug of history, relegate the truth about modernism as an art form to footnotes about Lewis’ and Pound’s “fascist sympathies,” promulgating instead the notion that modernism is a Leftist phenomenon. The bourgeois, liberal Right, those Leftists of yesteryear, would love it if the Left succeeded in claiming modernism for itself. Reactionary modernism’s pesky dynamism and energetic rancor upsets the tender sensibilities of the liberal Right, which does not like to make waves and would prefer civility in discourse.

In the way of these two ignoble hosts stands Jonathan Bowden’s spirit: chest puffed out, guns akimbo, and behind him is the vast treasure trove of the Right’s modernist heritage. He shall not let them pass and despoil that which is rightfully ours. With the publication of Reactionary Modernism, at last our patrimony is secure.