Back
About Him — Political Speeches Print 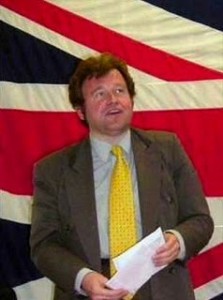 This is the transcript by V. S. of Jonathan Bowden’s brief speech at the BNP Ideas Conference in October of 2011 where BNP activists met to think of alternatives to the disgraced leadership of Nick Griffin. The first few words were cut off. The full audio of the conference is here. The recording of Bowden’s segment can be heard here, or by clicking on the player below.

[Y]ou do not form [a new party] immediately now. You form a party over time in the next 6 months to the next year, and you work to do so from here on in. You take the party from Nick Griffin from the inside out, now and in the next year. The present leader is a wily fox. He’s associated with everyone who dress up in uniform through to members of UKIP. He’s adopted every political position that it’s possible to adopt in this spectrum of opinion. Enormous amounts of money have gone through that organization, particularly in the last 2 to 4 years.

But we’re here to discuss the future and not the past. What will happen? And the Left is delighted about what’s going on. The Left sees the whole spectrum, from UKIP outwards breaking down into small fissiparous groups where everyone is in their own little sect, and people don’t talk to each other, and the present leader has brought things forwards and now contrived to ruin it all, and they’re delighted.

The way to stop it being ruined is to reconstitute it all over time. You’ve got a jigsaw, and somebody’s thrown the jigsaw on the ground, and all the pieces are higgledy-piggledy and pell-mell, and you’ve got to bring them back together again and reconstitute them and even turn them upright so you can actually stitch them together again to make a coherent pattern or picture. That’s what faces us.

What can be done is the process of firstly getting the pieces together, then getting them up the right way, then knitting them back together. You won’t do that in one afternoon in Leicestershire, but you may do that over about a year as you knit people together. You certainly need a nucleus of people to come together, and you cannot form a party through detestation of one political individual. It has to be a much broader and wider extent than that. The reason these little micro-parties that have been formed hitherto won’t go anywhere is they are largely the gasping last gesture of people who have been thrown out of that organization by the present incumbent and his clique.

What you need is to bring together everybody that can be brought together into a network or a confederation of people who will go forward from today so to do. So, you’ve got to form something from today’s meeting. Otherwise, it will be just another talking shop in the Midlands.

What I propose is that a national federation is formed of like-minded people inside and outside the British National Party who may well move to form a political party in the next year. That gives people the chance to reconstitute the party civically and socially prior to possibly forming a new one a year from now, so that the present leadership knows that they’re living on borrowed time and that they basically only have really 6 months to a year to prove that they’re different to what everyone now thinks that they are, or to step aside, which is unlikely and impossible, or to be driven through bankruptcy and criminality into penury and ruin, or to be taken over by new forces.

Politics is about vitality and politics is about energy. There’s no energy in that party anymore, and no one will do anything for the present incumbent and his leadership. The energy is here. The energy’s here in this room. See it’s not wasted!