Back
About Him — Political Speeches Print

On the Merging of the Left and Right 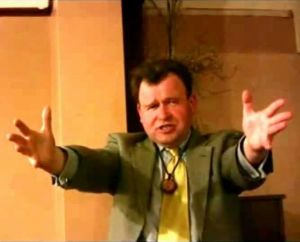 Editor’s Note: This March 22, 2009 British National Party “stump speech” given in Manchester was transcribed by Hyacinth Bouquet. Sadly, the video is incomplete. If anyone has a complete version, or information about where it was filmed, please contact us at [email protected].

Well, thanks very much! We got a bit lost earlier, but it was my fault. That’s why . . . From the other end of the country, one Market Street looks rather like another one. But I know that they would never make a meeting in the center of red Manchester, right in the center, near the gay village, and near [inaudible] and that sort of thing.

Now, I think this is about the fifth time I’ve spoken in Manchester. As long as the [inaudible] has been going in, the release of the membership lists surreptitiously at the end of last year, churches denouncing the party, Brown inviting in Obama’s aides to help in the election, that’s coming up in the middle of the European assembly. Brown saying that opposing the British National Party is the major priority for all Labour candidates — north, west, south, and east — across Britain, particularly in this region.

Brown has been told in the last two weeks that they expect two BNP MEPs to be elected, maybe one here in the northwest, maybe one in Yorkshire. But there are other parts of the country — London and Essex, where Essex Man has moved out to escape the “enrichment” of the capital — where they’re worried about what may occur.

Now the truth is, no one will know what happens in the middle of this year, because no can predict what happens to the UKIP vote. Last time, hundreds and hundreds of thousands, particularly of middle-class people, voted UKIP. It was a bin into which they could throw their votes, and protest in a namby-pamby sort of a way.

Voting for UKIP has got them nothing. It’s got them corrupt MEPs who can talk for two minutes. Who knows who your MEP is? Does any of you know who your MEP is? I only knew who mine was for a while because he was in prison for fraud! 75,000 pounds’ worth of benefit fraud! And when he was dragged to the jail, he kept saying to the policeman, “I’m middle class!”, as if that made a difference to nicking 70,000 pounds’ worth of benefit money.

In the European Parliament you can only speak for two minutes — in 27 different languages, one of which is ours — and you can only speak if you’re a member of a bloc. Now, if our people are elected, they will sit as a part of the “Right group,” let’s call it, of MEPs from across Europe associated with radical Right parties. The only British representatives ever to sit in that quadrant were a few Ulster Unionists, like John Taylor and others, who was very radical, very progressive, because, of course, a lot of the people he was sitting with were Catholics, and given the Northern Irish political situation, that was a brave move in and of itself.

The point of going into the European Parliament is ultimately to effect its destruction. That’s why you’re going into it. But the point is to get into it at a particular level so you can attack the Westminster tier here, within the United Kingdom. What we want is a pincer movement, where we come from above and below and attack the Westminster tier, which is our real objective.

We’ve got into the GLA [Greater London Authority]. You get into the European Parliament, it unfreezes the system and breaks it down, and melts down certain of the structures which have existed for too long. In areas like this, in cities like this, Labour — with the odd occasional liberal sort of intervention — Labour has run these cities as rotten boroughs, and they’ve run them in a sort of gang-tight way, linked to elements within the trade union movement.

In cities like this, as you all know, Labour are a sort of dictatorship. Almost a semi-Eastern European style type of dictatorship. The Tories don’t exist here. You have to mentally readjust when you come up from the part of the country that I was born in, where the Tories are everywhere. Here, it’s just a couple of old ladies having coffee with each other. They don’t exist. They’re hated, and people won’t vote for them. This means Labour gets in by default, time and again, and again, and again.

Driving through all these areas to get here, look at what’s happened to this city. I mean, parts of it have been utterly blitzed; and it’s not the Germans who have done it, is it? You just look at these areas, like Miles Platting. I mean, look. I’m just here from the South for an evening. It’s mile after mile after mile of shuttered shops; of closed factories; of pubs that have got boards around them; of large, decimated areas where a building has fallen.

There’s no capital to do anything with it, and it’s blitzed! It’s just not there! There are just gaps between blocks. People are sort of huddling about. You see a few white youths in hoodies in the streets, running around. Their parents doubtless have no idea where they are and what they’re up to. I doubt the Greater Manchester police have any idea what they’re up to. They’re probably too busy filming this meeting! Or, perhaps, preparing for the next Battle of Leeds. Who knows?

People have to understand that inside many of the immigrant communities, there are types of politics we haven’t seen. In many countries — take Bangladesh, for example — your clan, your extended family, and your mosque determines your political allegiance. All parties have paramilitary wings. Only in Northern Ireland, in recent memory, could that be said to be the case in relation to our politics. You have to go back 400 years, really, to our civil strife to get in touch with the type of political attitudes that come from these parts of the world.

Politics is communitarian. It’s based on identity. It’s based on what you are, not what class you’re in or what your profession is. There’s two parties in Bangladesh. One’s called the BNP. It’s called the Bangladeshi National Party. The other is called the Awami League. And when one of them wins, they machine-gun the offices of the other. They take control of the treasury. The army is loyal to the group that’s in power.

It’s just politics of survival, really; and when they see a party like the British National Party, they’re told by the rump of the far Left in this country that it represents that which is against them, and some of their more hardcore elements — who have very little in common with the indigenous Left at all, culturally — will nevertheless tip out with them.

One thing that people have noticed increasingly over the last 20 years is the merger of the parties into each other to a degree that, although in different regions people vote for different ones — blue in one area, red in another, up here a Tory loses his deposit — in parts of the south, Labour’s are Trotsky’s teachers, standing on two to five percent of the vote. They’re a minority party there, just as the Tories are here, but nationally, they’ve merged into each other. [David] Cameron and [Gordon] Brown and [Nick] Clegg increasingly sound like each other, increasingly endorse the same values, support the same wars abroad, with our troops in Iraq and Afghanistan.

Brown says he’s mildly critical, retrospectively, of the Iraqi War. He financed that war. That war cost us 200 lives. It cost us 2,000 injured. It cost us seven to 14 billion pounds. We have replaced one gang in the south of that country by another. We have achieved virtually nothing.